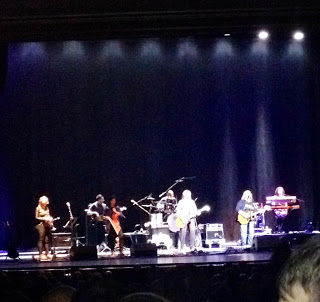 There is something that happens to me every time I see the Indigo Girls play. Right at that part in the middle of a song, right when Amy is getting so lost in her playing of the guitar, or the banjo or the ukulele, that she starts to bend forwards, towards the violinist whose hair will be hiding her face by then, right as her bow is moving so fast that parts of it are peeling off, flying wild in the air, right when Emily closes her eyes in that circle of light as she hits the highest note, it happens:

I am overcome with the urge to write.

As a writer you might imagine this happens to me a lot, and does happen sometimes, but if I’m honest, an urge like this doesn’t happen all that often. Certainly not as often as I’d like it to. Maybe it’s because I write to deadlines now, that I am working on one thing for longer periods of time with less freedom – even as I write this I am stealing time away from my novel. Maybe it’s because I write out of discipline, routine, sometimes out of fear, that I am less reliant on this urge to make me do it. Whatever the reason, I don’t get this feeling as much as I did last night, the feeling that unless I write right now I’ll lose something, some part of me, that something will be gone forever and I won’t be able to get it back.

There are things I know I will write about that have a different pull. Less of an urge but a slow percolation. A clearing. These are things I know I will not lose. Like how it felt on my wedding day as we heard the first notes of Seasons of Love play and began our journey up the aisle together. Or about my cousin who died suddenly on a Saturday morning last March. These are events that need time and space, things that I know will come to the surface to write about, just not today. But the urge from the concert last night is something different. Something immediate. Something raw.

Me being me, as the concert was happening I was trying to figure out why I felt that way. To think it out, rather than feel it. But the answer isn’t in the thinking. Watching them play, being part of it, is an experience. I am an audience member but I am something else too, I am part of this in some way I don’t understand or maybe I do. Maybe I always have. In the Beacon Theatre last night as in the tiny West Hampton theatre in July or under the open summer skies in Central Park, there is a feeling that builds, that winds its way around us, that before we know it, is holding us all.

I don’t know what the lyrics mean to some of the songs, I don’t know why last night, for the first time, the line you’ve got to find some goodness, some way, somehow brings me to sudden, sharp tears. But then again, maybe I do.

A wise woman I knew once told me that the longest journey you’ll ever take is from your head to your heart. It’s about 11 inches, she said, give or take. And she laughed. I laughed too, because it was funny and what she said sounded clever – the head and heart thing. And I kind of got it, I thought I did, but looking back, I don’t think I got it at all.

So, maybe my urge is inspired by seeing this passion on stage, this complete in-the-moment living of and being lived by music. Maybe witnessing creation makes me want to create. Maybe it’s because it’s women up there doing this, gay women who are so free to be themselves and share the darkest and shiniest and most hidden parts of those selves with us for an hour or two. Maybe it’s because this music, this band, these concerts are things that I have always shared with my wife, that they are, in so many ways a touchstone for us. Maybe it’s because they play the song we danced to at our wedding six weeks ago, and I can’t believe it is only six weeks ago, because since then we have been through so much, and sitting here next to her in her wheelchair, I am so proud of her and so full of love for her, and so conscious of my own humanness, my own limitations.

Maybe it is all of those things.

Maybe it is none of those things.

Maybe what matters is just to feel it.

To let myself feel it.

To feel it all.