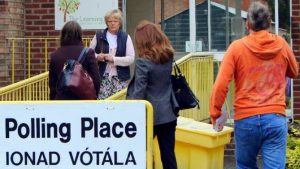 I am not in Ireland today. More than anything I want to be in Ireland and I want to list reasons (excuses?) as to why I am not, but it is enough to just say that I am not.

Instead, I am here, in New York City, in a Starbucks at the corner of 103rd and Broadway. I am tired from a big work event last night but I have been awake since early morning. I was greeted by a Facebook message from my uncle that he sent at 7:18am to let me know his “yes” vote had been cast. There was an earlier message from last night too, from an old neighbour, telling me of his intentions to do this same.

When I checked my Irish mobile I had a text from my father. “Queue outside polling booth in Dalkey at 7am this morning,” it read. “We have voted. X. Dad.”

I am in tears writing this. I have been in tears off and on all morning – sitting in the sun eating my breakfast, tuning into the RTE News at One hearing about the high turnouts at the polling stations. Checking my Twitter feed and seeing the stories of so many home to vote. Here, on my laptop in Starbucks.

A friend I saw this morning has been following this in the New York Times, as many of my friends have. “When did Ireland turn from such a bastion of conservatism into a country on the brink of making history with gay marriage?” he asked. I told him I don’t know. Because I don’t know where this new Ireland came from, is coming from. I am only so very grateful that I am a part of it.

The tears this morning are for many things, I suspect years of things, decades of things. They are tears for the 17 year old me, in hiding, frightened, alone, unable to say the words out loud even to myself and for all the 17 year olds whose lives will be changed by the result of this vote today. They are tears of sadness because I am not in Ireland today, where more than anything I want to be, to use my own vote, my own voice. But mostly, they are for those other voices – the voice of my mother, my father, my uncle, aunts, cousins, friends, former colleagues, clients, classmates, teachers, strangers – voices that will be heard today, voices that are chiming in with mine.

More than anything I hope the outcome will be what I want, what those voices want, that tomorrow we have an Ireland we can all be proud of. But regardless of the result tomorrow, those voices matter.

Because every “yes” is not just saying yes to my right to marry in Ireland.