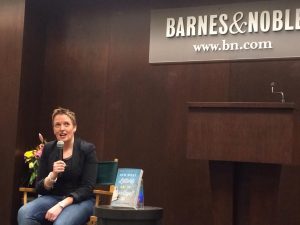 I was born in Dublin in 1974 and grew up in Dalkey, a small village about nine miles from the city centre. As a young adult I travelled a lot – summers in America, a year in Australia, a few years in London. In 2011, I moved to New York City where I live now with my wife. I’ve published four novels. I love to teach creative writing. Those are some facts about me, but if you really want to get to know me, probably the best way to do it is to read the answers to the top three questions people tend to ask when they find out you write novels:

“Did you always want to be a writer?”

Yes. Reading my Enid Blyton books as a child I’d be so sad to be finished I’d start to make up my own stories and adventures for her characters. At school, when others moaned about having essay writing for homework, I didn’t mind at all, and I’d look forward to my own characters coming alive on the page.  During my teens I read anything and everything. When I came across certain lines that described so exactly things that I had felt deep inside but never expressed or heard expressed, I copied them into a small hard backed journal and revisited them often, awed anew each time by the power of even the simplest of words when put in the right order. After college I travelled to Australia, in part because I didn’t know what to do next. It was there, in a dingy room with one bright, brilliant window in Balmain, that I remember reading something John Irving wrote about how doing anything other than writing would be “vaguely dissatisfying”. Reading his words, some part of me knew that I felt the same way and that it wasn’t about becoming a writer, as much as accepting and embracing that being a writer was already part of who I was – whether I was ever published or not.

“Where do the ideas for your novels come from?”

Ideas for stories – for novels – come from anywhere and everywhere. If I am in the right headspace everything has the propensity to be an idea; a snippet of overheard conversation, a doorman outside a building at night, the way the light falls on the trees. If I’m not in the right headspace  – by which I mean not being present to my own experience because I am too caught up in the past or the future – the best idea will slip by, unnoticed. That’s one of the reasons that in my classes I don’t just work with students on the craft itself, but the idea of looking at things with a sense of wonder and curiosity and experiencing our experiences in a fresh and new way.

Of my four novels so far none are my own story – or even close to it – but each includes aspects of experiences that relate to my life. Typically, it’s a kind of percolation process, starting a novel. The first thing that comes for me is the character’s voice and then, some sense of the situation or set up he or she is in. As I get deeper, I notice that the plot and story is being formed by things I have seen or been influenced by. I’ve written a lot about how a visit to The Old Slave Mart museum in Charleston was the germ of an idea for my latest novel I’m Right Here and I don’t think it’s a coincidence that I was working with homeless and formerly homeless people in New York when I wrote How Many Letters Are In Goodbye?

“What’s your writing process? Do you write every day?”

Okay, so that’s two questions, but they usually go hand in hand. The answer to the second question is “no” at least not most of the time, or, to qualify the answer –not creatively anyway. I journal every day, but usually because of my schedule, I get to work on my fiction about twice a week. As you can imagine, this time is precious and I make the most of it. That and a deadline are two of the more motivating factors for me!

I very rarely write at home. Part of my creative process is getting out, for a run or even just a walk around a certain part of the city, then finding somewhere to write – usually a quiet café. For my most recent book I’m Right Here, Brooklyn was my writing zone and I had this perfect quiet café in the heart of Brooklyn Heights to write in – which unfortunately was a bit too quiet because it closed down! Even though it took me the guts of an hour on the subway every day to get there, my creative process would start as soon as I left the house, listening to music or thinking about the characters, so that by the time I got to my spot in the café I was primed and ready to go. Now I’m working on a new novel and I’m finding myself drawn to Washington Heights which is a mostly Dominican area in the north of Manhattan. A large part of writing for me – especially in the early stages – is that it has to feel fun, it has to feel like an adventure.