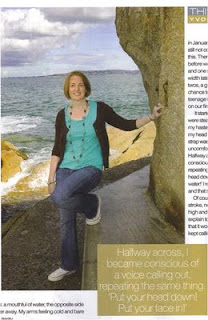 This piece originally appeared in the Irish Daily Mail magazine last September. I thought it might be worth sharing here for anyone who hasn’t already seen it….

Growing up next to the sea, you take it for granted. That’s not to say you don’t notice its beauty, just that it is always there, like, say, electricity. Where I went to school the sea was a constant presence, a shimmer behind the railings, rockpools where pictures in our science books came alive. You could say that the sea was part of the curriculum.

During the summer, my friends and I headed over Killiney Hill and down the steps at the back to Whiterock. When we had money we went to the Rainbow Rapids in Dun Laoghaire, snaking plastic tubes that swerved out of the old baths building and back in to a deep plunge pool inside. The green slide was the fastest, with more twists. I always went for the beige one.

You see the truth was, even though I was surrounded by sea, I was no water baby. Far from it, but then I was not from a family of water babies. My mother never learned to swim and my father is the only person I’ve ever met who taught himself, lying across a dining room chair, a library book open on the floor beneath him as he practised strokes in mid air. And yes, it was Dad who taught me.

I only remember snatches of those lessons: a mouthful of water, the opposite side of the pool seeming to bob ever further away. My arms cold and bare after the water wings had gone. Somehow, I got the idea that if I put my face fully underwater, I would certainly drown. Despite all this, the lessons were a success, certainly more so than our driving lessons years later, in that I did actually learn to swim. I swam with my neck arched and my chin well above the surface, I swam with graceless strokes fuelled by panic. But I swam all the same.

When we were teenagers, my friends grew more adventurous. They leapt off rocks and piers and boats. My fear grew in direct proportion to their confidence and I stayed near the edge, never higher than my waist, well out of danger of a wave breaking in my face. It bothered me for a while but then it didn’t, because we grew up and there were much more important things to do. For a few years I lived in London and the closest I ever got to the sea was the canal, where the listless water barely covered the wheels of the submerged shopping trolleys. And it was only when I moved home, back to the sea, that I started to notice it in a way I never had before; the colours and shape of the waves, how being next to it seemed to fill me up, like water seeping into a footprint on the shore.

That’s what brought me to the side of that pool one Monday night in January, convincing myself, but still not convinced that I could do this. There was an audition swim before we were assigned classes and one splashy breathless width later I was joining the level twos, a group I barely had a chance to assess before our teenage instructor set us off on our first width.

It started badly. My new fog resistant goggles were steaming up already and in my haste I hadn’t fitted them properly so the rubber strap bisected my ear. Halfway across, I became conscious of a voice calling out, repeating the same thing. “Put your head down! Put your face in the water!” I realised it was my instructor and that she was talking to me.

Of course, I was doing my usual stroke, neck and chin achingly high and I ignored her. I wanted to explain to her that I wasn’t ready, that it would take a while, but she kept calling, louder each time and just like that, my body obeyed her, even though my mind hadn’t. My face was in the water and I could see tiles and the shimmery white leg of someone in front of me. I pulled my head back out, gasped in some air before going under again and again until suddenly I was there, at the other side.

Clinging onto the rail, my heart pounded. I grinned from ear to ear. The instructor was focussed on someone else now, making wild gestures with her arms at one of the men. Whether it was what he was doing or should be doing, I couldn’t tell. She hadn’t noticed my achievement, no-one had. There would be no pat on the back, no brass band parading along the tiles. But none of that mattered. What mattered was that when it was my turn to swim back, my heart pounded a little slower than before. And each time that night and the next Monday and the one after that, the fear loosened its grip, bit by bit, so I was able to leave it behind like the trail of bubbles in my wake.

I’m still no water baby. You wouldn’t envy my technique. But I swim in the sea and I love it. I run straight in. When the waves come, I close my eyes and dive right through them and when I break the surface again the icy tingle on my skin feels something close to freedom.