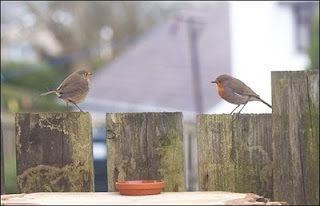 It’s not that March was a barren blogging month. Far from it, there were lots of blog worthy events; the first ‘hello’ in Terminal Two, my new Villagers CD, a ceili in Monkstown that provided more than enough material. I could’ve blogged about the hen party of one of my oldest friends or a turquoise frying pan or the two robins by my foot in Blackrock Park or pruning the garden after a long winter or about how it’s easier to look at a closed down shopfront when the sun is shining.

I almost blogged about childhood memories of St Patrick’s Day – fractured views of the parade through gaps between the people in front of me, the boom of ‘ATA Security’, a shamrock shake afterwards.

I wish I’d blogged about a nighttime drive across the Wicklow mountains, looking back over my shoulder to see the orange flames rising from the landscape, sudden and frightening against the black, black sky.

I should’ve blogged about the Dublin Book Festival and the novel writing course I’m doing with the Irish Times and the new French edition of The Other Boy.

You’ll be glad I didn’t have the energy to blog about a sudden bout of gastroenteritis.

Truth is, it wasn’t lack of material or even that I was too busy to blog in March – no more so than usual. What happened in March was that I was on a break from my second novel. I took the break seriously, those precious few weeks to draw breath and not work and where any writing done is sporadic, half written scribbled things, notes in journals and sometimes just inside your own head and sometimes not even that.

But now it’s April and it’s back to it, the next draft. And something tells me there’ll be lots of new things to blog about.