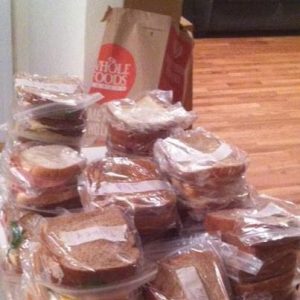 It’s a week since the storm. It’s a week since the storm and only now am I sitting down to write about it, to put words in a line, on a page and try and explain. In part this is because last week was busy, chaotic in a completely unstructured, routine-free way which doesn’t serve me well. In part, this is because it takes me time to process things, to see things, to feel. Today there is a need to write about it, a hunger that makes me put off all the other things that  need to be done and do this thing which needs to be done more.
We moved, my partner and I. We moved two days before the storm hit. Saturday. And before then we’d disconnected the TV, the internet, had been packing, cleaning, packing. So it was only on move day, in a chain passing boxes and bags down the stairs that we heard the warnings from our friends, my partner’s sister, the removal men. Stock up, they said. Fill the bath, they said. Make sure you have water.

On Sunday we took their advice and on our first morning in the new place instead of unpacking we did what everyone else was doing – we queued. We queued for water, for cans of tuna fish, for batteries and a flashlight that I call a torch. The queue in Starbucks was to the door, a handwritten sign said they were closing at 2:30pm and wouldn’t be open until Wednesday. Wednesday? All Starbucks? Yes, all Starbucks. Don’t blame us, blame the weather man.

Monday morning was wet, a little wild, but nothing to write home about, certainly not for someone raised along the Irish sea. Like the New York Stock Exchange, the soup kitchen where I work was closed – for the first time in 30 years. My partner’s job was closed too so  we unpacked a little, borrowed a radio from a new neighbour that turned out to be an alarm clock and not a radio at all. We braved the weather to buy a proper one, more batteries, another lighter, just in case – it was like Christmas, in a way, this last minute panic to buy as one by one everywhere shut down until even McDonalds closed. The street was silent, like their subway sisters they were in garages somewhere, waiting.

That’s what we spent our night doing too sitting and waiting, cooking and baking, eating and waiting and cooking again. All the while we listened to the radio, making our own pictures instead of those on TV – a crane was swinging on 57thStreet, the front of a house on 14th Street had blown off. There were people who wouldn’t evacuate zone A.

Night came on and the wind whipped the trees and spat rain at the window. The sky was full of strange colours – like lightning but not lightning, shades of blue and yellow and green and red. Transformers exploding, that’s what we found out later but that night, but we didn’t know as we watched them highlight the silhouette of the apartment across the street. There were Facebook updates, of course. Someone’s power was out, then someone else’s – early, it seemed, before the storm could have even taken hold. A tree fell on a friend’s boyfriend’s mother’s car, another friend had flooding – water on her street, up to the steps of her apartment building, into her hallway. Our lights flickered and stayed on. I could see the wind but I never heard it. A few miles downtown they were in darkness, streets like rivers. Nothing to be done we went to bed, slept soundly. I didn’t hear rain on the window.
Tuesday was almost dry, a bright clear sky, blue with sweeps of white. Thousands were without power, half of Manhattan. We had light and gas to cook breakfast. The radio told us about houses still smouldering in Breezy point, whole blocks washed away. Outside our street was clogged with leaves, a few branches.
On the walk to midtown – 60 blocks –  branches became trees, uprooted across roads, on top of cars. There were torn and sagging awnings, a flattened bus stop sign, two lots of collapsed scaffolding. And it took an eternity, that walk, with the sidewalks full, like Grafton St at Christmas and everyone stopping to take photos of whatever signs of Sandy they could find.
Looking back on the week, Tuesday was the day, I think, when I was least aware of the  full impact. While everyone else was battling with Sandy’s aftermath and those who weren’t were watching on screen, my partner and I tried to track down UPS packages, clear out the last remnants from the old apartment, clean it up for its next inhabitants. My work e-mail was down, no-one was answering their phones, no-one was calling back.
On Wednesday, I tried to get to work, waited more than an hour while six full buses sped by, blowing their horns in case we tried to climb on board.  People came and went. We chatted over the sound of chainsaws behind us in the park as crews in yellow jackets tackled fallen trees. An old man collected branches while he waited, dropped them by the sawn up logs and soon we were all doing it too.
After an hour I walked to find an open Starbucks and tons of messages from everyone at home. And it was only when I saw the photos that everyone in Ireland had already seen – the waterlogged cars, trucks floating in the Battery Park tunnel, half of the island in blackness – and I began, slowly, to understand.
On Thursday I made contact with work. My boss was OK, everyone was OK and a handful of my colleagues and volunteers had made it to the soup kitchen where a crowd were gathered. Usually we feed over a thousand, every day, but that Thursday they were running out of food. We were going to have to turn people away.

Putting the call out on Facebook for sandwiches was just an idea, something quick and simple that might do something, that might help tide us over for the next day, or at least for a while. I wrote the post quickly, crouched in Starbucks with everyone else who had no internet, put my contact number on the post, just in case.

Stories are told in numbers and Sandy is no different: 55 deaths, 40,000 displaced and without a home in New York City, $50 billion worth of damage. But there are other numbers that I’ll remember: 88 Facebook ‘Likes’, 34 ‘shares’, 21 phone calls checking ingredients, packaging, our location. At 8:30 that evening, the buzzer in my apartment rang and there were four adults and a child carrying 18 shopping bags of sandwiches. At 10, just as my partner and I were finishing separating the peanut butter and jelly from those that needed to be refrigerated, I was beginning to panic about how I was going to get these to work and that’s when the phone rang again. It was call number 20, the second last of the night and someone else who had seen the post, who wanted to help, someone who lived close by, who offered to drive me to work the next morning.
The roads were quiet that Friday morning, petrol shortages keeping people at home. Downtown the swinging traffic lights were dull and we nosed around corners, lurched across highways – my good Samaritan, my sandwiches and me.
Some of my colleagues were there already and we hugged in the cold, unloaded sandwiches together. As we set up the tables, more people arrived  – women, men, families, a priest, all showed up with sports bags and boxes and backpacks full of sandwiches – each individually wrapped, some with a chocolate inside, or a granola bar, fruit. One bag had homemade brownies inside, still warm.
At first, we worried that there wouldn’t be enough people to eat them all, that since we’d run out the day before they’d gone somewhere else. But as the morning went on, word got out and they came. They came and came until almost one o’clock, when we had handed out over three thousand sandwiches and diverted hundreds more to others who needed them by then, more than we did.
Power came back on in the soup kitchen on Friday night, like it did in much of Manhattan. I had a poetry reading in the Irish Arts Center and although the turnout wasn’t huge, it wasn’t cancelled and we were able to get the subway home. By Saturday almost all the trains were running and my partner’s sister in Long Island called to say they had power too. On Sunday when I went for a run in the park, I only saw one fallen tree, still tangled in yellow tape. And yesterday was Monday and the office was open. We had e-mail and phones and power to cook now, for the people lined up outside, some of the same people, some different, than the ones who ate sandwiches last week.
Today is election day and I got my TV working this morning but somehow the need to write about this week, to remember is more important than any coverage. I don’t know exactly what it is I want to imprint on my brain by writing this, what lesson it is I may have learned.  Generosity, kindness, faith in the human spirit – certainly these are some – but where I work I am lucky to see many of these qualities every day. No, it is something more than that, something about how a crisis strips away all those other layers, the layers that keep us separate and apart, that keep us from looking one another in the eye, from speaking the truth, the fear the contains us and contracts us and keeps us hidden.
What would happen if we could blow off these layers, not just when we are in crisis but all the time? If we could harness this openness, this energy, the need to connect and be part of something for others?
That’s what I saw in every carefully labelled sandwich last week, what I heard in every voice I spoke to on the phone – a need to be needed, to help someone else, to connect, to share. More than a need, really, a hunger, a void. Something that, at least for a while, was filled with sandwiches.