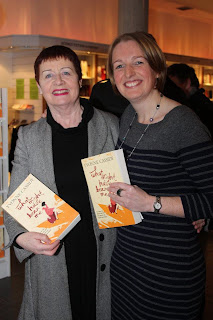 About fifteen years ago, when I lived in London, there was an advertising campaign to encourage people to become teachers. The ads ran in cinemas and they featured head shots of men and women who looked straight into the camera and slowly said a name, before it panned to the next person. They were young and old, these people, their faces were different shapes, different colours, but they had something in common – whatever name they said made every one of them smile.

“Mrs Sanders.” “Mr Singh.” “Ms Watson.” “Mr Johnson.” At first you didn’t know what the names meant, that was the idea, but when the screen faded to black, one simple sentence ran across it, in white letters: ‘you never forget your favourite teacher.’
Watching those ads, in the darkness of the cinema, I said a name too. I said it in my head, in the silence between the other names. Her name would have sounded good as part of the ad, I always thought, it would have fit in well.

The fact that she was my English teacher strengthened her odds of being my favourite teacher, of course it did, but the thing is, I didn’t love English, not then. Not yet. Sure, it was OK, it was certainly better than a lot of other subjects, but I didn’t love it. At home, I loved reading – I read everything – and I loved to write, but school English was different. School English was old fashioned, complicated, written in a language I didn’t understand by people who I had nothing in common with. English had nothing to do with my life. Of that I was absolutely sure.

So, there I was, fifteen years old with my mind made up and Mrs O’Neill changed it.
I feel like I can remember the first day I took my seat in her classroom and that she changed it right there, that day, and even though I know that can’t possibly be true, it feels like it’s true. I feel like I can remember opening a new copy of Hard Times, starting to read and thinking “more of the same” right before something changed. Before everything changed.

In the two years in Mrs O’Neill’s class, I seem to remember more than the rest of secondary school put together. I remember her explaining what Dickens was doing when he chose the names Bounderby and Steven Blackpool and Thomas Gradgrind, explaining it in a way that made it into a conversation, where we had a voice too, an opinion that counted. I remember acting out MacBeth, the day Mrs O’Neill turned the classroom into a courtroom and how I got so into being Lady MacBeth’s defence lawyer, I was gutted when the double class ended, even though we got her off.
In my memory, Mrs O’Neill always had our attention and yet I remember too, her writing “sex” on the board, to get our attention. In a convent secondary school, it was a technique that was always going to work.

Of all the things that I remember about Mrs O’Neill, though, what I remember most in her class is being seen, being encouraged, being understood. Mrs O’Neill was the first person who noticed I liked to write, who told me I was good at it, that I should write more. She was adamant that I should choose the creative writing essay from the list on the exam paper rather than pushing me in the deathly dull direction of the ‘factual’ essays which had always been drummed into us all as the way to score higher grades. Goodbye, ‘Discuss Ireland’s unique role as an island on the edge of Europe.’ Hello, ‘A thing of beauty is a joy forever.’

Maybe English had more to offer after all.

After I left school I chose English for my degree. I read Jane Austen and Robert Frost and Samuel Beckett. Bertolt Brecht and Caryl Churchill. I learned more about what I liked to read. It was after college when I moved to London that I went to my first creative writing class, the first of many, many classes. I had lots of teachers. I learned why I liked to read the things I liked, what made them good. I learned that writing was hard work, that it wasn’t as easy as I used to think it was back in Mrs O’Neill’s class, but that in some way I didn’t fully understand, I had to do it. To keep doing it.

My first novel was published in May 2010. I felt a little silly, sending a launch invitation into the school, wasn’t sure if Mrs O’Neill would get it, if she’d wonder why I’d asked her, but I sent it anyway. On the evening of the launch, walking down towards the bookshop, things felt a little unreal. In the windows there were posters of the cover of my book, with my name on it, inside, a whole bay of shelves was devoted to it. Someone had put it in the ‘best seller’ section.

I stood with my parents by the window, next to one of the posters while some friends took photos. I wondered if anyone would show up, if it would be half empty. Peering through the glass, I saw there was at least one person there already. It was a woman, who had picked up my book, was reading it. She had her back to me and it was a back I recognised, I thought I did. The woman was still reading when I came in, she only turned around when she heard me behind her. When I saw who it was, I hugged her without even thinking about it, like it was the most natural thing in the world to hug a teacher I hadn’t seen in almost twenty years.

The fifteen year old me would’ve been mortified, she’d have sworn that that would never happen, never in a million years, especially in public. But then again, as it turned out, she didn’t know everything.

I don’t know if they make ads any more about teachers, if an advertising campaign ever ran in Ireland like the one I used to see in those London cinemas, so many years ago. But I know that if I am ever asked to name my best teacher, my favourite teacher, the teacher who has had the most impact on me, that from all the wonderful teachers I have been so lucky to have in my life, there is still only one name I will ever say.

Thank you, Brenda, for everything.