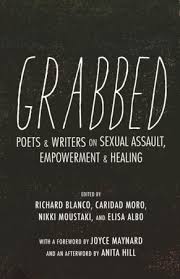 That first Tuesday you almost don’t go. You can find plenty of excuses. It’s January. It’s dark already and raining. You want to watch Obama being inaugurated on telly. And anyway, you don’t need to go. There is nothing wrong with you. You feel fine.

Your therapist says that fine isn’t a feeling, that it stands for Fucked-Up, Insecure, Neurotic and Emotional. It makes you laugh when she says this. You’ve been seeing your therapist for 15 months and you don’t know what you’d do without her. She’s worth the €100 a week, €200 on the bad weeks. That first Tuesday, you only go for her, because you told her you would.

You never knew this place was here, right off Merrion Square. The entrance is next to the office building where your friend works, and even though you know she’ll be long gone, you pull your hood tighter around your face. In the seconds between ringing the bell and the door being buzzed open, you almost turn around and leave but then it is open and there’s the woman at reception who you recognize from the intake assessment. You go upstairs. You are early – you’re always early. There’s someone waiting in the waiting room. You lock yourself in the bathroom.

At two minutes to seven you come out. The door to the main room is open and you walk straight in, like it is any room. Four couches are set up around a rug and one is still empty. You take a seat. You check again that your phone is turned off.

You don’t look at the others until you have to, until it starts. They’re not like you, that’s the thing you make up your mind about first. You have nothing in common except this thing you wish you didn’t have in common. Half are men and you know you shouldn’t be surprised but still you are. One is a taxi driver. One works in IT. One of the women has breast cancer. They are all older than you and from the northside, with accents that sound different than yours. You are from the southside, from an affluent area that some would call privileged. You’re not a snob, you don’t care about things like money or where people are from. It doesn’t matter – you were raised to believe it doesn’t matter – but sitting here, suddenly it does. Things like this don’t happen to people like you. Money should protect you from some things.

You hate the therapists straight away – that’s the other thing you remember from that first Tuesday. They are both women – one black, one white – and they hardly say anything. They sit on hard plastic chairs you hadn’t noticed at first. You wonder why that is, if it’s because they were last in or the unwritten rule is that the victims are the ones who deserve a comfy seat. You remember the force of that thought hitting you, the snag of the word victim.

Did you speak that Tuesday? Probably, yes, definitely. You don’t remember what you said but you know now, looking back, that you spoke because you thought you were supposed to, that you should. You are a good girl. You do what you are told. Maybe that’s what got you here.

You come the next Tuesday and the one after. On Fridays, you tell your therapist how much you hate all of them, how you are not like them. You tell her this isn’t necessary – it’s not like you have proper memories, it’s not like it affects you. This thing happened thirty years ago – some days you still wonder if it happened at all. You don’t tell your therapist just how hard you cry in your car on Tuesday nights on the way home.

You keep coming. You sit and look at the rug. You listen to the others talk about their families and the Church and one man who goes to visit someone’s grave. The woman with breast cancer has started to get comfortable talking about her inner child. Fuck that. Fuck her. A new woman joins the group. It happened to her when she was in her 20s, living in New York. She goes on and on about how badly the NYPD handled it. When the white therapist asks her how she feels, she goes silent, and twists her ankle around and around, the sound of its clicking filling the room.

Memories come in shapes you don’t expect. You thought memories were visual, not physical, but you start to feel them in your body, like your body is not your own. You wanted memories, but you don’t anymore. Now you want your body back, not to betray you like it did before.

One Tuesday, the black therapist says something. She says that it’s easier for children to think that they are bad than to believe the world is bad, that it’s too scary for them to think that.  You’ve heard this before – some version of this. But that’s the first Tuesday the tears come in the room instead of in the car on the way home.

There are more of them after that. Feelings. Not “fine” anymore. The room holds it all, the tears and the rage – a teddy bear kicked once so hard that it hits the wall. Sometimes there can only be silence. Sometimes you sit cross legged on the floor with another woman – a girl – drawing together, the only sound, crayon on paper.

You start to scream in the car on the way home, bouncing your hands off the steering wheel. You blare Alanis Morissette, Four Non Blondes, Eminem to cover the sound, compose yourself at the traffic-lights. You buy a punch-bag and boxing gloves – items you’ve wanted for as long as you can remember – and you punch until you are sweating and breathless. You have hot baths, hot tea, hot toast and butter, you put something easy on the telly. On the nights it is really bad you sit on the bedroom floor in the corner with a blanket and your teddy bear and a coloring book, waiting for it to pass. Once, you make a mistake and schedule a client presentation for a Wednesday morning. You show up, you get through it, of course you do, you’re a shower-upper. But you don’t make that mistake again.

The Tuesdays pass. Spring. Summer. You always know how near or far away Tuesday is in the week without having to check. You don’t look forward to it but you don’t hate it either. You don’t miss it except when you’re on holidays. You still look down when you turn off Merrion Square, breathe easy when you are buzzed in. It’s a miracle you’ve never run into your friend from the office next door. Sometimes there are workshops organized on Saturdays, retreats away in the country. You always go, even when it means changing your plans, even once when it’s your birthday. Yoga is your cover for everything. People don’t ask much about yoga.

120 Tuesdays. That’s how many you go for, give or take. You miss four when you travel to New York where you meet someone you like, someone who you tell about it, someone who texts you every Tuesday when you get home – who you know would call, if you wanted her to. Some nights now, you don’t drive home straight away, you linger by your car to talk to one of the others. Sometimes you laugh together. Sometimes when you come home, you feel so light you dance, twirling and spinning in your living room and sometimes, as you’re doing that – right as you’re doing that – the rage comes and it never ceases to shock you, the power of the emotions colliding. You talk about it the next Tuesday, how you didn’t know that could happen; feeling two different things at the exact same time.

When you stop going, it’s not because you are finished, but because you’re finished for now, you’re finished enough. You are moving away – to New York, to the texting woman, to the next part of your life. Your tears are for saying goodbye and for leaving so much of yourself, such a big part of yourself, in the room. Your tears are for hope, for love. And for healing. And because after all this time, and all these Tuesdays, you can finally name what happened and know – really know – that the shame isn’t yours to carry anymore.

And that it never was.