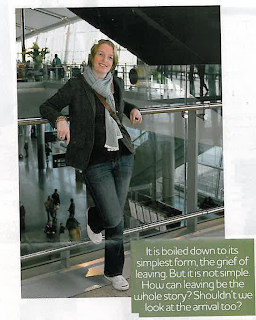 The boxes take up nearly all the floor space. I count them quickly.

I count again. He’s right. I sign. He leaves, grumbling one last time that the building needs an elevator.

Each of the boxes says ‘Cassidy, New York’ in red marker, and something about that makes the move more real than any other time during the three months it has taken them to get here. I open the first one, slicing through brown tape to find books – my books, the same creased spines. The fact that they are here, that we have all made it to the same place, is amazing and thrilling. As I gently take them out, I imagine their journey across the sea, on docks, in warehouses. It took me seven hours to get here, less, but three months seems more like the kind of time it should take to move from one country to another.

Last October, packing these boxes, I was somehow shielded from the reality of what was happening. I knew I was moving to New York – of course I knew – but even as I was busy dismantling my life in Dublin, some part of me didn’t fully get it. Like a child who doesn’t understand time and space, New York ceased to be a real city and instead only existed in my head.

New York has existed in my head – and my heart – for a long time, long before I ever set foot here. And yet, I never thought I’d live here. I thought New York was destined to forever be the place where I’d wished I’d lived. But life can take us in directions we don’t expect, or maybe directions we’ve always been coming in, and for me that direction was across the Atlantic.

It’s amazing how easily a life can be dismantled. Houses can be rented, cars can be sold, businesses can be wound up. Bit by bit, the tiny little details and grooves of our days, our weeks, can be taken apart and packed up or given away or let go of entirely. Until what you have left fits in thirteen boxes.

As I empty the boxes I find things I’ve missed, but I will never find everything and that’s the hardest part. To make room for your new life, you have to let go of so much of the old. Family, for instance, can’t fit in a box, or friends. How do you pack up a yoga class? Or Dun Laoghaire pier? It’d cost a fortune to ship and besides, someone would be bound to miss it.

It has become a favourite story of the media, emigration, another oozing scar from our Celtic Tiger mauling. On television, we watch families wave off children, sisters, uncles, friends, as reporters hover, waiting for a sound-bite that will sum up a nation’s loss. The story is boiled down to its simplest form – the grief of leaving – but it is not simple at all. How can leaving be the whole story? Shouldn’t we focus on the arrival too? The opportunity it brings? The hope? If we let the cameras keep rolling beyond the security gates would we see a little glimmer of this? Would we see tears dry? The same children, sisters, uncles, friends, picking up luggage, hailing taxis, walking up the steps of an apartment building, smiling, glad to be home?

As I write, I am acutely aware that unlike so many others, I was not forced to leave. I know that makes it different. Leaving is hard enough when you want to go and my heart goes out to those who left because they had no other choice. But, even then, leaving can only ever be half the story.

Here, in New York, things are starting to feel a little more like home. I have a social security number, a bank account. I have started to receive junk mail. My thirteen boxes are all unpacked now, space found – miraculously – for everything in my apartment.

And today, 104 days after I arrived, as I walk down Ninth Avenue I know I have more with me, than the contents of those boxes. There is ice in the air but the sky is blue as any June morning and something about the light reminds me of Sandycove. True, the sun reflects on glass and steel instead of water and rocks, but I can see that too, all around me, I can almost see it.

Because even though Sandycove is three thousand miles away it’s much, much closer than that. Like so many other things that wouldn’t fit in the boxes, I packed it somewhere else, somewhere there is no weight restriction. Dublin and New York will always be in parallel, they will never meet, but in my heart, there is space enough for both, for all the people and places and things I love, wherever they are.

And for me, for now, that’s enough.