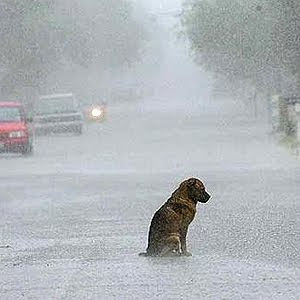 The title of this blog post came to me earlier this evening, as I stood on my yoga mat in Bryant Park and raised my arms and my gaze to a rectangle of cloud overhead. I know I should have been staying present, but it was hard to do when the clap of thunder from somewhere behind us sounded like a skyscraper falling and the raindrop I felt on my skin become raindrops, became rain.

The teacher gave instructions louder, then faster. She held her microphone close to her mouth. Down dog, warrior one, warrior two, side angle. As our mats got wetter, we slid through the poses. People ran to shelter as she implored them to stay, calling after their departing backs if they remembered what it was like to play in the rain. Tree pose was to be our final asana before being officially rained off. Left side first, then right, we swayed in the rain. And just as we were about to pack our bags, the sun came out and we started all over again.

That was my second yoga class this week. The first was a birthday bash for Anusara yoga, which was fourteen years old at the weekend. Anusara is the type of yoga I mainly practise now and it’s hard to explain what’s so special about it. There’s lots of different parts to it and one of the elements I like best is the focus on synchronicities, the connectedness of life, something they call “stepping into the flow of grace”. That makes it sound really gentle – namby pamby yoga – but it’s anything but and on the way to this class taught by two of Anusara’s leading teachers I was as intimidated as I was excited. Handstand awaited, I was sure of it. The splits. Crow pose into tripod headstand and back out again.

By the time I got to my mat I’d concocted the yoga sequence from hell, was planning my escape route to the bathroom when things got too tough. But things never got too tough. Instead, the ninety minutes felt like nine, as they took it in turns to guide us through poses that were grounding, gentle, challenging, fun. Gratitude, abundance, joy, those were the themes and the feelings too. I thought of my yoga teachers back home, how much I owe them, how I wished they were there, how in a way, they were.

Leaving the studio with a smile on my face and an ache in my hips I got talking to one girl visiting from Paris, a girl who heard my accent and asked if I knew a yogi in Ireland who stayed with her earlier in the year. A yogi in Ireland who was one of the two teachers I’d just been feeling such gratitude for.

The funny thing was I shouldn’t even have been at that class, wouldn’t have been if I hadn’t missed the workshop I was supposed to attend the day before. I missed it because of the rain, a Sunday downpour that lasted all day. I know how ridiculous this sounds. I am Irish, after all. I know rain. But I didn’t know New York rain, rain that falls so heavily and so suddenly that rivers flow at the corner of each block, ankle deep, shin deep, rivers that become impossibly wide to jump so the only option is to put your already soaking runner into the middle of the water. I didn’t know the kind of rain that causes subways to detour, traffic to drive in diagonal lines and park across pedestrian crossings in a way that can actually make it incomprehensibly impossible to cross a road.

Like everything else it does, New York does rain to extremes and the day before I’d found myself cursing the city as I saw it rear its ugly head and it bothered me, that feeling, that I could hate the city I loved so much. But as I said goodbye to my new Parisian friend I smiled because I’d forgiven New York already. And swinging my unopened umbrella I realised I loved the city again, more than ever and that maybe, sometimes stepping into the flow of grace, means getting your feet wet.