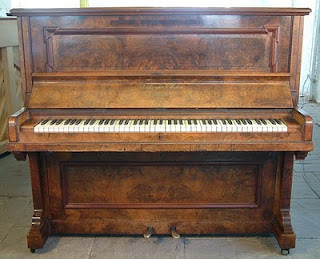 I went to a funeral last Thursday, a funeral of someone I’d never met, someone I didn’t know. Only now, sitting down to write about it, I feel like I knew her very well.

She was the mother of a friend of mine. The kind of friend who you can have a great laugh with and a great conversation with, a friend I don’t see every week, or even every month, but whenever I spend time with him, I vow to see him more often.

We met a few years ago, when I was going through a tough time in my life, a time, it would turn out, that would mark the start of a period of great change for me. We shared a small office and the same sense of humour and a liking for chocolate muffins. But mostly what we shared was a passion for music. There wasn’t much in the office but there was an old CD player – 1990s ghetto blaster style – and we took to taking turns hijacking it every day, sharing our soundtracks with each other. And somewhere between Pink Floyd and Arcade Fire, we became friends.

Today, I heard his mother’s soundtrack; Mama Cass and Mozart and of course Bob Dylan. She was a young woman and her illness had been brief, barely eight short weeks between the day she saw the first signs of it and the day at St Jerome where we all stood shoulder to shoulder waving her goodbye. But she was an organised woman, with a plan in an envelope of what she wanted. And it was this plan that her two boys – two men – bravely brought to life with no celebrant, no middle man, only this rich tapestry of words and music. Without the framework of the familiar, the rhythm of rituals, there was a purity, a simplicity to it all. The sound of a life well lived, of a soul, singing goodbye.

And as I stood there, listening to her voice rise and fall in the chapel, the clear pitch of each note as she sang “The Moon and St Christopher”, I felt as if I had known her, this woman who touched so many. And I wished I had. And it made me want to work harder – so much harder – at really getting to know the people around me, and most of all, to really get to know myself.